5 Questions with the Queen of Condoms

Brenda Alwanyi is a 22-year-old, third year Kenyatta University (KU) student in Nairobi, Kenya pursuing a Bachelor of Arts in Sociology, Gender, Development Studies and Psychology. She is also Kenyatta University’s “Condom Queen” and an advocate for young people taking control of their sexual and reproductive health. We sat down with her to learn more about her work.

Q: Tell us – how did you become the “Condom Queen?”

I became KU’s Queen of Condoms on Global Female Condom Day, September 16, 2017 at a joint FC2/Pathfinder and KU facilitated campus event. I volunteered to champion female condom use among young women and girls on campus and surrounding communities.

The Condom Queen was created to complement the efforts of the King of Condoms and to increase outreach to young people, especially women, focusing on the female condom. The King of Condoms has been distributing condoms in and around Nairobi for more than 7 years.

Q: How did you get involved in sexual and reproductive health?

I chose to support the Female Health Company (FHC) female condom initiative because I was concerned about the health and welfare of my peers on campus, especially those engaged in unprotected, unplanned sex with multiple partners.

I am the first girl in my family to attend university. When I arrived on campus in 2015, I was naïve. No one had told me on what to expect; how to stay safe. Meeting different friends from various backgrounds exposed me to the world of house parties and clubs. I even met “Sugar daddies” or “sponsors” -older men who have sex with young women for cash. I realized how many women like me were at risk for sexually transmitted diseases and unplanned pregnancies.

My passion is to empower and positively impact young people--especially girls-- through advocacy on the use of FC2 for dual protection from unintended pregnancy, sexually transmitted infections (STIs) and HIV infection

Q: What are your main duties?

The “Condom Queen” is a voluntary advocate position. I work with young people on campus and I travel into the communities to speak with people about the importance of protecting themselves from STIs. I advocate for FC2 as a female-controlled tool that empowers women to initiate safer sex, contributes to women’s advancement and will help Kenya contribute to several Sustainable Development Goals (SDGs). 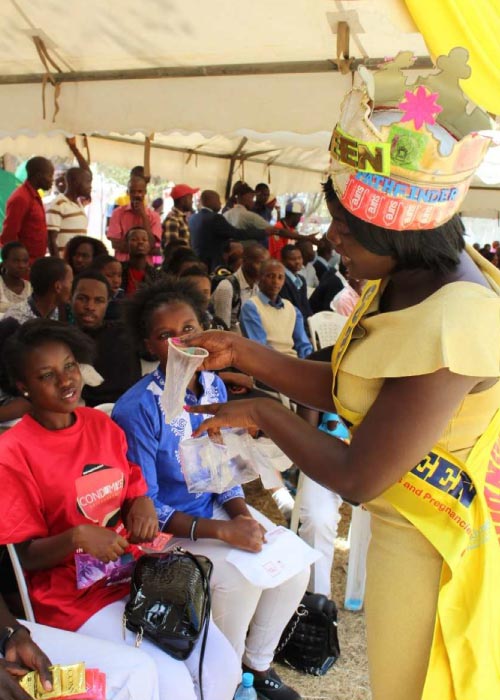 As a career youth ambassador, I have a lot of contact with students—helping link them to relevant career openings with corporate organizations. I use these opportunities to educate students about their sexual rights. In addition to training me as a peer counselor at KU, Pathfinder supports my work by providing female condoms for distribution as well as training and on-the-job mentoring.

Pathfinder also supports my visits outside the University to informal settlements and slums to create awareness and increase FC2 use among vulnerable adolescent girls and young women.

In the slums and schools, I educate young women and girls on the importance of using FC2 for safe sex and protection from STIs and unintended pregnancy. I also promote healthy timing and spacing of pregnancy (HTSP). I distribute at least 50 female condoms daily and that number is increasing as my friends are also involved as condom distributors in their hostels I also work with a Kakenya initiative, a community-based organization that identifies Maasai girls likely to end up in early marriages and puts them in school. Through the Kakenya initiative, I mentor young girls from these hard-to-reach, underserved, minority communities to help them make healthy decisions. I often travel on public transport and use these opportunities to also educate my fellow passengers by making announcements using the bus speaker system.

I meet a lot of people, but I can’t be everywhere. I also conduct sexual and reproductive health advocacy through various online forums. I have created a WhatsApp group for girls to post questions which I try to answer there, I also engaged through Twitter, YouTube and Facebook.

Q: Do you feel that you are making a difference?

Yes. There is a young woman who I live with at the hostel –she is blind. She often asks me for advice about how to stay healthy and have healthy relationships. I like living close to her so I can support her. It is also common for people to take my phone number and call me back at a later time so I can talk to other young people in their families.

Q: What advice do you give young people?

Because I came to campus very unaware of what life would be like, I am committed to helping other students understand life here and to help them stay healthy while adjusting to campus. In addition to empowering other young women to protect themselves from HIV infection and unintended pregnancy, I also try to motivate other students to work hard so that they can succeed in school. 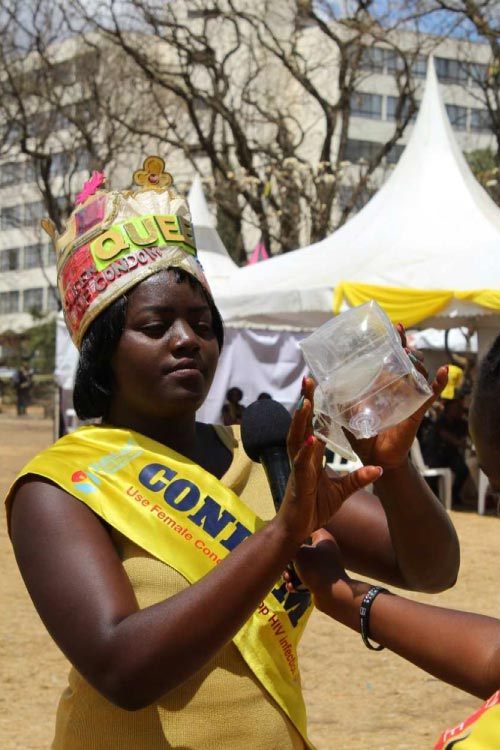 Brenda is supported through the FC2 Education and Promotion Project-Africa, funded by the Female Health Company and implemented by Pathfinder in partnership with the Government of Kenya and local stakeholders.

See More About Brenda in this Video